Six left at noon. She said that she didn’t like zero days because she couldn’t just sit around with nothing to do.

It was clear that she was stressed about the weather. Cold and precipitation were forecast for Sunday, a few days from now. Someone on the internet had written that Sobos “had” to be out of the Sierras by October 1, with an unclear or else that could be snow flurries or certain death.

I was new to the Sierras, but after living in the Rockies for seven years I was pretty sure it would take more than a couple early snows for the mountains to become impassible. I was adamant that after busting ass through Oregon and NorCal, we should slow down and enjoy ourselves.

But no one seemed to believe me. 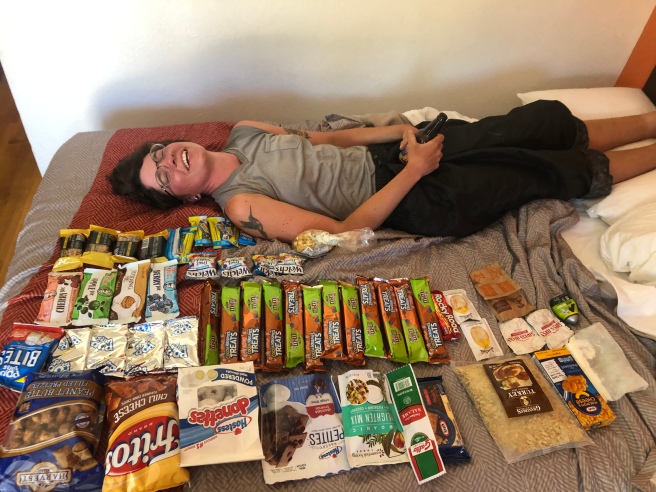 I called NoDay and told her I didn’t know if I wanted to finish the trail. I could quit after Mt. Whitney. The excitement of the High Route was over, and the prospect of a heads-down, high-mile race to the finish held very little joy. I couldn’t get the idea out of my head that I’d be happier at home.

“I think you should keep going,” she said.

“Don’t you think you’ll regret it if you don’t?”

Probably. Now that she mentioned it.

In the evening we watched the movie Coco. Just like alcohol tolerance is lowered by abstinence, my heartstrings were overly susceptible to the first film I had seen in months. I bawled nonstop through the last thirty minutes, so much so that Poppins was slightly alarmed. It reminded me that there was a world outside thirty-mile days, with color and warmth and music and the endless, complicated webs of love and hate that connect human beings.

As I packed up my backpack, I told Mary Poppins about my uncertainty.

He was uncharacteristically reserved. “All I know is everyone who quit the AT regretted it.”

I went to the coffee shop next door and crammed as much food down my throat as I could, then got a $9.00 protein smoothie to go. (“Treat yo’self before you eat yo’self.“) We got a ride with Hans, a German-American immigrant who had just dropped his daughter off for a school backpacking trip. He was going fishing.

Devil’s Postpile National Monument was small but mighty. A 60-foot uplift of columnar basalt proclaimed “a geologic wonder” made for a nice side trip before we hit the trail.

We hiked into a burn that offered extensive views, and I felt better immediately. The aspens were changing and bare peaks lined the sky.

“Where you headed?” asked a horseback rider.

“Good for you,” he replied.

We passed another party on horseback, this time carrying large hunting rifles. They didn’t get any deer, the young man told us. Or bears, although they all had bear permits. “We saw one,” he said. “But we figured, let him live another day.”

I took out the map to see if we were looking at anything notable. For the hell of it, I checked out the routes into Bishop and saw one that wasn’t listed on Guthook: the Paiute Pass Trail.

The final miles into camp were stunning. I lingered on the descent, hoping for sunset clouds. As I entered the trees, gold leaves seemed to glow in the dim light. 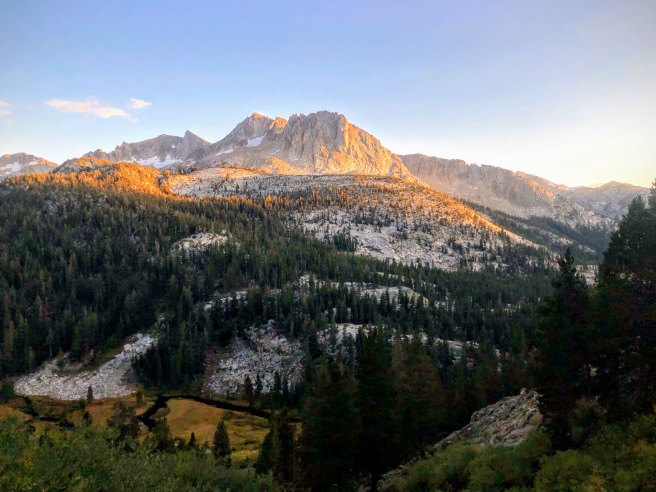 A JMT section hiker told me that the bad weather had been postponed — again — to Monday. Almost a week late! I told Mary Poppins and he was skeptical.

We slept close to water, but it wasn’t very cold. I didn’t even cinch my sleeping bag around my face. It was a welcome surprise; I hadn’t expected to be this warm ever again.

It took almost an hour for me to drink hot chocolate and pack up. My gear had nearly doubled in volume and gained over six pounds since Northern California.

We passed a lot of hikers that morning. I noticed that two of them wore sweatshirts with the emblem of a local amputee support group. The man had a prosthetic leg.

I said my rote good morning. “How’s it going?”

“This is the best day ever,” he replied. 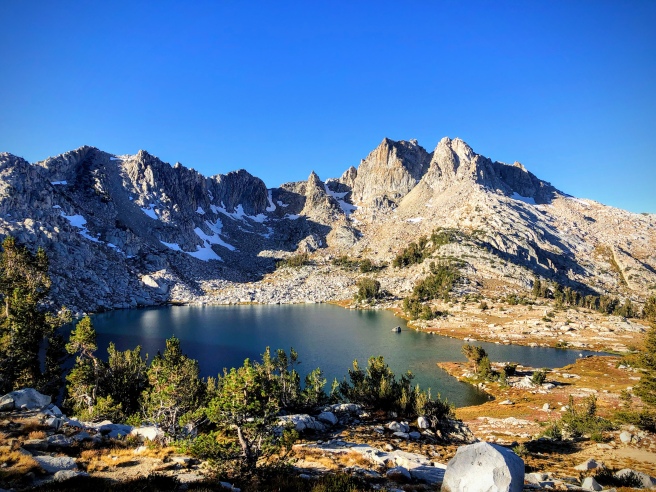 I really wanted it to be. But with every step my body cried out No! I was walking in slow motion. The uphills were like wading through cement, and on the downhills I felt like every step would send me toppling over.

I talked to Mary Poppins again about quitting the trail. It was suddenly so hard, and for what? I talked about how there wasn’t a huge pull to make it to Mexico anymore, and I didn’t want to jeopardize my relationship with backpacking. “I kept telling myself everything would be better in the Sierras,” I said morosely. “It isn’t.”

He didn’t say much except to reiterate that people who quit usually regret it.

I sat under a tree for a while and smoked weed. When I stood up to go, I winced at the usual things: my pack is too heavy. I am too thin.

I gazed at the aspens and thought about how homesick I was.

It wasn’t Colorado, but this year it would have to do.

I could flip a coin on the summit of Mt. Whitney, I thought wryly. Coin flips work because the moment of suspense reveals what’s in your heart. What if I flipped right now? What would my heart cry as the coin revolved?

It would say keep going. My heart ALWAYS says keep going. It was my body drumming up the protest.

I decided to blame the weight loss. It made sense — I was feeling the mental and physical consequences of dropping fifteen pounds since Washington. This problem could be solved. But how?

I could do regular protein shakes, and hot meals for lunch. I could do better.

Selden Pass, the last of the day, wasn’t even hard — 2,000 feet over six miles. But the last steep part felt so impossible that I burst into tears in front of Mary Poppins, which made the Best Day Ever even worse. 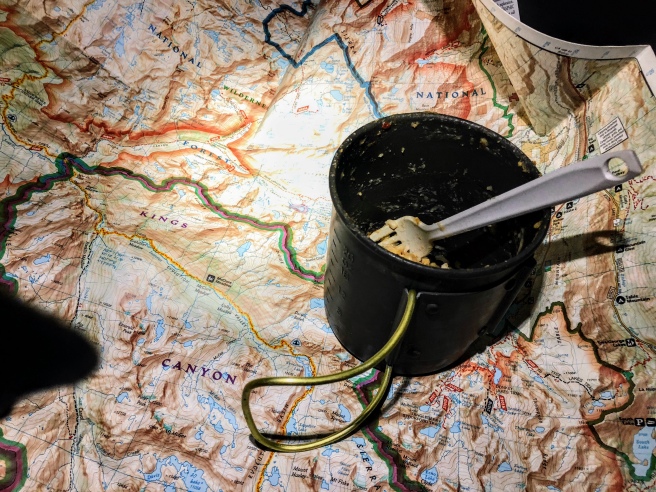 It was Sunday. Fog obscured everything but the low willows around the lake, and my hands burned painfully as I packed up my tent in the freezing air.

We ran into Creedence and Chef, whom we hadn’t seen in a long time. Creedence said that he had just checked his InReach and the chance of precipitation was down to 10%.

I gazed up at the fog coalescing into dark clouds. “It’s going to rain.”

“You have to read the sky. This isn’t Washington; it doesn’t look like this for no reason. It’s gonna rain.”

Actually, it snowed. But we were on a long descent and it quickly turned to rain. I stopped under a tree and pulled on my rain jacket, Frogg Togg rain pants, and homemade rain mitts. Mary Poppins donned his ultralight poncho, which covered his backpack and had a built-in skirt.

“I have, in Switzerland,” Poppins replied. “But we were on skis, so we just skied off the mountain.”

We had decided to take the Paiute Pass Trail and hitch into Bishop if we could. It might be dark by the time we reached the trailhead. 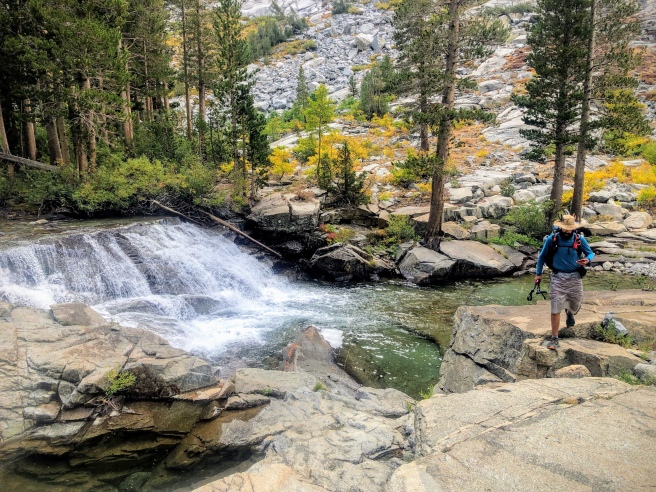 Finally, I capitulated to Mary Poppins’ offer to take some of my food. I opened my pill bottle to fetch some ibuprofen and saw the (prescribed) Adderall that I had never taken on trail. Well, today had to be the day. Pretty soon I felt a lot better.

There was a dusting of snow at high elevation, but the sky was an endless canvass of blue. The trail took us through Humphreys Basin, once again intersecting the Sierra High Route. Majestic Mt. Humphreys rose in geologic abstraction from the flat tundra, just a few feet shy of 14,000.

The basin was rimmed by the Glacier Divide to the south and I ran my eyes along the high and jagged ridge, wondering where the Sierra High Route could possibly cross. It was a warm, dancing feeling, to veer off the PCT again and find someplace even more remote and magical. 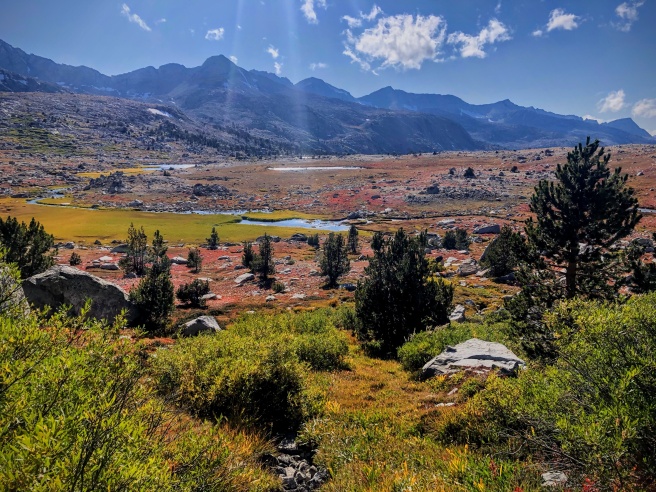 We scurried down the other side of 12,000-foot Paiute Pass and made it to the North Lake campground before dark. It was two quick hitches into Bishop.

But the beauty of the afternoon didn’t last. The hostel in Bishop had barely enveloped us like a warm blanket when I walked into the kitchen and came face-to-face with someone I knew back in Denver. All the one-thing-after-another bullshit from last winter came rolling back and hit me like a train. I thought I was breaking free when I left for the PCT. I thought everything would be wildflowers and joy.

I lay in my dorm bunk feeling trapped. Are you serious, I accused my life. It was not a question. Are you fucking serious.

I woke up and I couldn’t move. Something more than soreness was weighing down my legs.

I ate cereal. I imagined a bus carrying me far away from the hills of California, across the desert, and back to the same tall buildings and click-clack of hard shoes on asphalt. I imagined my bed; I imagined my dog. There would be autumn sunshine and cups of coffee. There would be dishes in the sink and cast iron on the stove. It would snow in big lazy flakes and I would watch from the snowglobe of my wall-sized windows. If it was too cold to bike, I would drive my car.

I made eggs and spinach and bacon, and forced myself to eat that too. I imagined the view from Mt. Whitney, the highest peak in the Lower 48. I thought about Canadian Border Cloud who used to exist, all smiles and bursting excitement and absolute confidence that she would see Mexico.

The hostel had a bookshelf mostly populated by guides to the great outdoors, but among them I found Zen and the Art of Motorcycle Maintenance.

For a pretentious tome by a white dude in the 70s, it was pretty good. One quote jumped out so hard that I wrote it down immediately:

“The truth knocks on the door and you say, “Go away, I’m looking for the truth,” and so it goes away. Puzzling.”

Three years ago, I called NoDay from the CDT in Anaconda, Montana. 500 miles to go. I’m having my Ashland moment, I sobbed. It was a reference to her 2013 PCT hike, a low point when she called me and said she wanted to quit.

That was it. I ordered a new pair of shoes to Kennedy Meadows. I took one of the hostel loaner bikes to the grocery store and bought a four-day resupply, counting calories but trying to be sparing with the weight. I bought iron pills on the suggestion that I might be out of strength because I was totally anemic. I told Poppins I would hike 20-mile days and stop in Lone Pine instead of carrying all the way to Kennedy Meadows. He looked at me seriously and said that he couldn’t do that. I resisted the urge to roll my eyes and just said “I know,” because how much clearer could it be that it was time for me to hike my own hike, alone?

Six showed up in the afternoon. She had gone further than planned and looked a little rough for it. The nights in the low teens had been bad.

We attempted to go bowling. They guy at the desk told us it was League Night, not open to the public for another hour. We could wait.

We tried. But 55 minutes rolled around and we all admitted that we were too tired, returned to the hostel, and went to bed.

Up next: Are solitude and slow days the solution to Cloud’s malaise?