Guthook is an app. It’s evolved quickly over the years to monopolize the thru-hiker GPS market, with maps and an aggressive red line to tell us exactly how many tenths of each mile we have to roads, campsites, and water sources. Old men criticize it for taking the mystery out of hiking… but didn’t maps do that at one point too?

Personally, I don’t love the comment feature. On each waypoint, users can comment like it’s a Facebook post, and predictably, they sometimes take it too far. There were almost memes at this point — the best sunsets, milkshakes, burgers, and other “bests” dictated our stops and starts. And it was relatively anonymous; hikers often said that they “heard” something when in fact they read it on Guthook.

Guthook warned us about “aggressive deer,” which made us laugh. But sure enough, they circled our campsite all night, crunching over twigs and sniffing around for sweat, pee, and potato chips. They stared us down from the side of the trail, even as I clacked my trekking poles. What on earth was happening?

When we stopped for water, Mary Poppins told me he had seen a bear. “Either a black bear or a small grizzly,” he said.

“They don’t have grizzlies in California,” I replied. Everyone wants their black bear to be a small grizzly.

The Marble Mountain Wilderness was blowing our expectations wide open. We were back IN the mountains, not just circling them. And suddenly there was life in the sky again, clouds pooling and streaking just enough to offer respite from the sun. 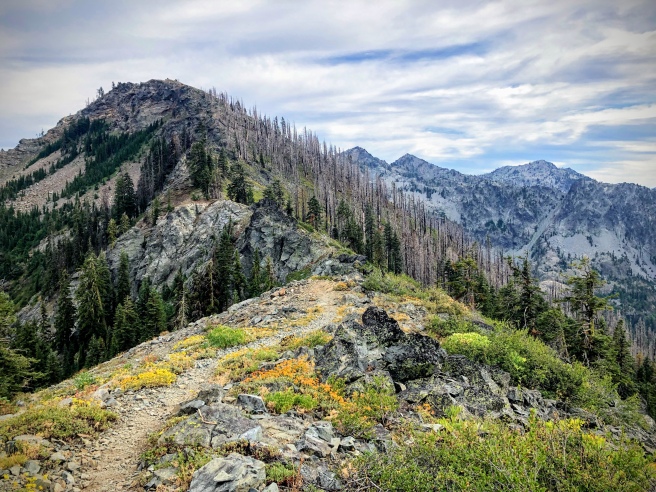 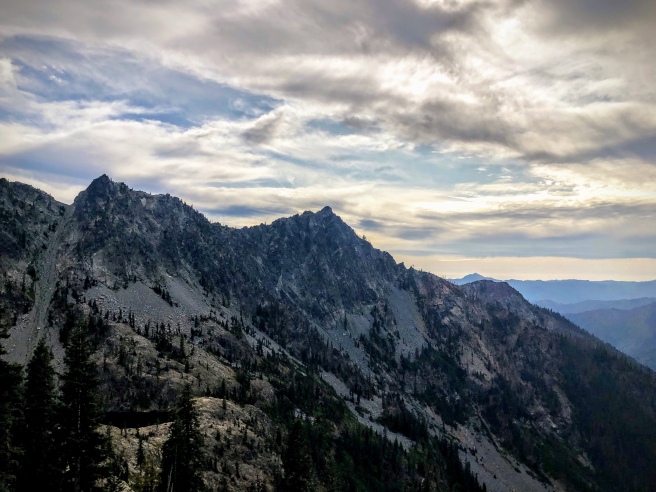 The prolonged climbs reminded me of Washington. But to my surprise, it felt good. “Maybe you need the hikers’ high,” said Mary Poppins. “You need to work for it.”

Even with the promise of town, it was hard to get up. My legs hurt in the acceptable way — muscles, not bones. But I made it out of my tent as the sky was turning pink and hit the trail at 6:30.

It took us three hours to hike seven miles. (Toto, we’re not in Oregon anymore.) I checked Guthook. “It’s mostly downhill from here,” I said. “But in the NorCal way, where it also goes up.” Still, we made ten by 10:00 to reach the road.

It was a notoriously hard hitch into Etna, so Mary Poppins didn’t hesitate to call a local trail angel whose number was listed on the Guthook app. I still felt weird about this. It wasn’t that it felt like cheating, because waiting around for a hitch was the worst. No, it made me uncomfortable that thru-hikers were treated like royalty for such a privileged exploit. It fed the already-rampant entitlement. But I told myself that it was mutually beneficial; hikers were a huge boon to small-town economies.

Etna was adorable. The buildings were brightly shabby, the people were friendly, and unlike most Western towns or places in general, there was no striking contrast between the old and the new. Christopher, our driver, said he couldn’t imagine living anywhere else. The sentiment was repeated by everyone: Etna was home. Very beautiful and very far from just about everything else.

At the brewery, which felt more like a diner, we enjoyed the best burgers of the PCT. Mine boasted bacon, avocado, pepper jack, and a fried egg… maybe I should always design my own burgers.

When I first walked through the aisle in the grocery store, I didn’t think anything of it. Skeletons, plastic cauldrons, spiderwebs… it sure was a lot of Halloween stuff for a year-round display.

Or was it about to be fall?

Halloween, I recalled, was the end date of my long-distance permit for the PCT. Not that it really mattered. The end of the trail was a little scary regardless of the day.

Before we left town, Slippy got a second burger and the rest of us got root beer floats. An older woman pulled over on the main street to offer us a ride, another trail angel. She recited many facets of her life during the drive: an acclaimed figure-skating career, an unusual arrangement with her husband and his girlfriend, and her “multicultural” grandchildren. (“And we’re Republicans!”)

A strange thing happened back on the trail: it began to rain. The Northern California skies were suddenly alive with many layers of motion.

Six shouted something from up ahead. “A rainbow!” cried Mary Poppins in his thick Swiss accent, and took off sprinting down the trail in an emblematic display of his personality. 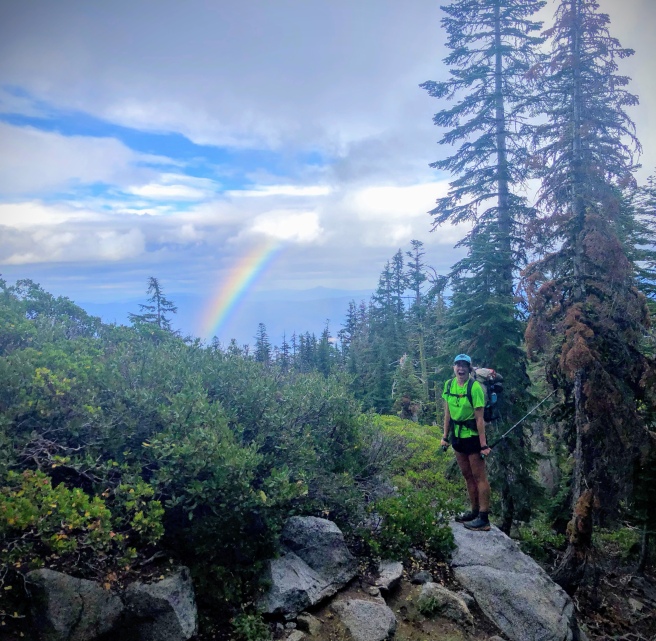 We stopped at a lake just as the rain began. Six and I wedged our tents next to one another on a tiny patch of dirt. For the first time I didn’t cook dinner, just ate donuts and listened to the rain.

I packed up as one cotton candy cloud swirled above the lake. Six emerged distraught; her hand-me-down tent had flooded overnight. It was just the seam at the foot, so Mary Poppins found cell service and ordered seam-sealer to the next town, Dunsmuir.

We had something special waiting in Dunsmuir. 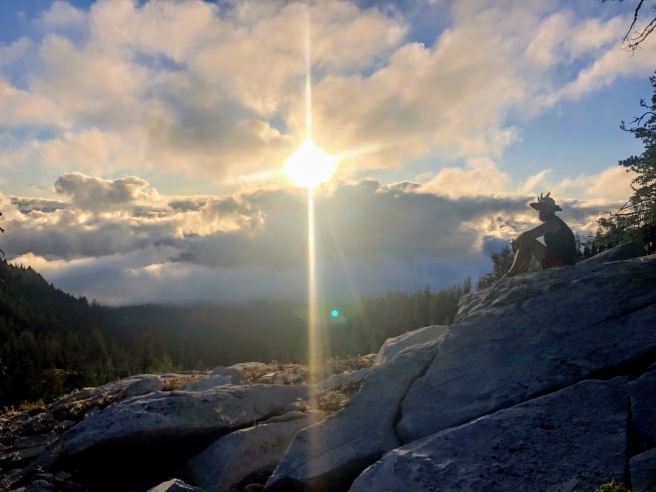 The trail stayed high and took us past the Trinity Alps to the east. Mount Shasta came ever more clearly into view, reigning over the landscape. It compelled us to stop when we caught a good view, and I told Six and Mary Poppins about the vortex. “People think it’s this concentration of spiritual energy,” I said derisively. “They think compasses don’t work and crystals are magic.” 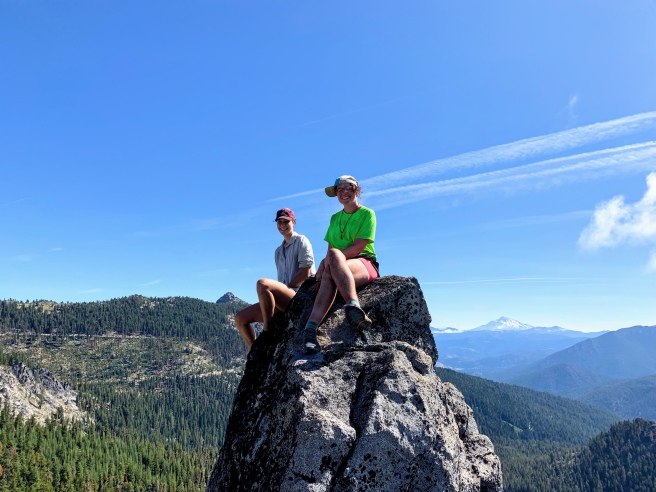 We dipped into a valley and heard a sound like tuneless wind chimes.

The Guthook app told us that our campsite had “the best sunrise on the PCT.”

But it was a beautiful campsite.

I awoke for the second time (not unusual) around 2:30am, and stared for a while at the stars. The moon, even at half mast, was bright enough to obscure the faraway ones. I saw Cassiopeia overhead. What was the story there? A woman punished for her aggressive vanity, eternally chained up as an object for someone else’s consumption. We are always being warned not to love ourselves.

Far below, I heard the gentle clank of cowbells in the dark.

We lingered by the sunrise. Was it the best sunrise on the PCT? Why do we feel the need to compare them?

I noticed that my right hip flexor hurt, but the pain disappeared within ten minutes of walking. Thru-hiking is like trying to shake out a very static-y blanket, I mused. With each shake you get rid of some creases, but others form so that the blanket is never smooth.

It seemed like a really good metaphor at the time.

Six had a new, dire warning from Guthook: rattlesnakes. Apparently there was one living under a log at our next water source.

I could corroborate this. Rampaige had told me about a serious encounter in which the snake struck at her, but missed.

Six was almost too afraid to cross the stream. “No PCT hiker has ever been killed by a rattlesnake,” I tried to assure her. “It would make the news.”

It was rattlesnake weather — extremely hot. In fact, it had been extremely hot for a while. Every day I swore that I would start hiking at 5:00am, and it’s probably obvious that this never happened. It made the days harder and longer than usual.

Somehow, we all ended up lying down on a very cozy log. “I think this is more comfortable than my NeoAir,” said Carjack.

It was essentially a memory foam mattress. I never wanted to leave.

Day 59: The Best Sunset on the PCT

After a terrible sleep, I was out at 6:00 to the call of coyotes. Shasta had become a usual fixture, and pink rays seemed to emanate from summit.

Six passed me at the first stream and told me there were mice running around her tent all night. “They got into my toilet paper and chewed it up into unusable pieces,” she said. “Why would they do that?”

For the millionth time, I thought that PCTA needed to issue ten permits a day instead of fifty. Hikers are destroying a whole goddamn ecosystem.

A few hours later found me kneeling painfully in my camp shoes, digging a grave in the silty beach. I had spilled Cheez-Its all over the ground.

Porcupine Lake was a godsend on another very hot day. Guthook said it was the best swimming lake in NorCal… and I couldn’t help but believe that Guthook was right.

Some hours later, I sprawled on the giant cairn that marked the trail to the spring, feet on my backpack. This was it; I had lost and some nebulous entity called “The PCT” had won. It wasn’t the land, it wasn’t even the trail, it was a manifestation of my own vanity.

I dragged myself to the spring one-third of a mile off trail and kept walking. Sometimes magical experiences are quickly followed by hot dirty exhaustion, as well as the speculation that if you had hiked through your magical experience, you would be in camp right now.

I caught up with the group in the spot that Guthook said was the best sunset on the PCT. We lingered and we kept walking. 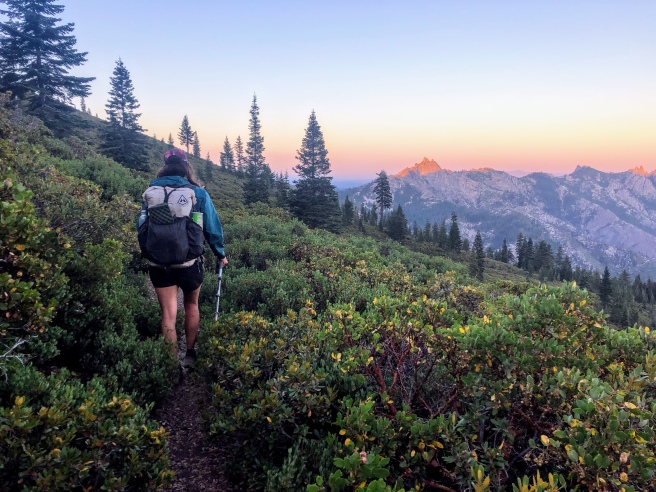 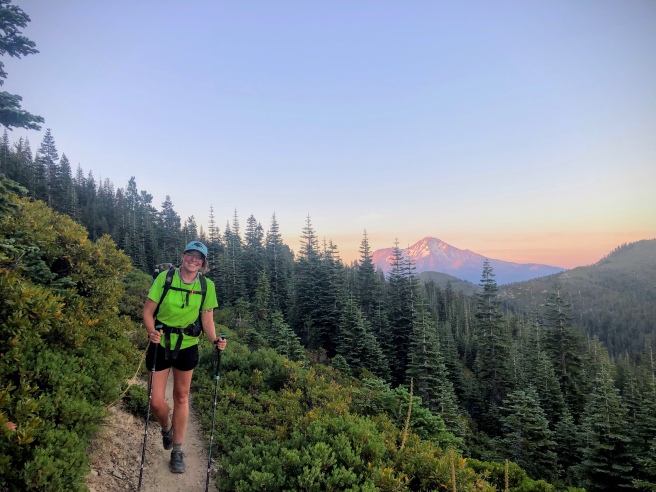 The magic was back.

We hiked toward our intended camp in the dark. Guthook comments had warned of a mountain lion in the vicinity, and Six, Mary Poppins, and I stuck close together. It was a little spooky when the trees closed over us, so we sang. ABBA, of course.

It was fourteen miles to town, and I was going to hike it on a sole Lucky Charms cereal bar.

“The ultralight bros who say you should run out of food on the last morning are bad people,” I told Slippy. “Evil.”

The gnats were so bad that we resurrected our bug nets. “I passed a Nobo earlier,” said Six, “and he asked if I was running the downhills yet.”

The brewery in Dunsmuir had a peach tree in the yard and a beer-themed map of the State of Jefferson hanging in the back. I ordered a smoked salmon BLT and chicken wings, plus the Blood, Sweat, and Tears IPA.

Then we went to the cabin.

Up next: What happens at the cabin? Who, if any, will be eaten by a mountain lion? And a surprise animal guest awes Cloud from the sky…